I just watched Michelle Obama's speech on C-SPAN and it was incredible. What a great speaker! If anyone finds it on video somewhere let me know so I can link to it. Here's a summary from the Daily Kos.
Posted by Arloa Sutter at 9:05 PM 1 comment:

Can social business and micro enterprise end poverty in Chicago? 2006 Nobel Peace Prize winner, Muhammed Yunus, thinks so. Here's a link to a Crain's Chicago Business video about it.
Posted by Arloa Sutter at 8:50 AM 3 comments:

The Starfish and the Spider 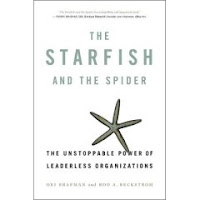 I just finished a good book, The Starfish and the Spider: The Unstoppable Power of Leaderless Organizations, by Ori Brafman and Rod Beckstrom. It reminded me of books like A New Brand World and The Tipping Point. It is about the power of leaderless organizations such as AA, eMule, Al Queda, and the internet. They are unstoppable because like starfish, if you cut them in half, each half will regenerate into a whole new starfish. AA just continues to grow wherever someone decides to start a group around the twelve steps. There is no spiderhead that can be cut off to stop it from growing. In order to move in a different direction a starfish arm must convince all the other arms to move in that direction. Hybrid organizations incorporate centralization as necessary to ensure trust and security, while maintaining decentralization to harness the contributions of the wider population. Skype is used as an example of a decentralized system that is revolutionizing the phone industry, P2P music sharing is changing the music industry and Craigslist, Ebay and Wikipedia have overtaken traditional ways of doing business and sharing information. Catalysts have the ability to bring people together around a shared ideology and then get out of the way to let it grow. The book really stimulated my thinking.
Posted by Arloa Sutter at 10:07 PM 2 comments:

I am honored to participate in the HELPSudan Birthday Party for the Lost Boys at 6:00 PM Saturday night at the Swedish Museum at 5211 N. Clark. HELPSudan is an organization founded by four of the Lost Boys to restore the dignity and hope of the people living in the Bor Region of southern Sudan. Their mission is to establish learning facilities, recruit teachers and provide school supplies as well as provide health resources and clean water.

If you are unfamiliar with their story you really need to read about their incredible journey. These boys who are now in their twenties are a true inspiration. Below is a video of Jok Kwol Wel, who traveled back to Sudan with several board members last year and was reunited with members of his family who had assumed he was dead. Jok told his story today on Chicago Public Radio.

The four Lost Boys who founded HELPSudan pooled their own money to start a school in southern Sudan by hiring one teacher. In less than a year 11 volunteer teachers and 1,000 students joined him. Our goal Saturday night will be to raise enough money to build a permanent school building.

Here's a link to a post from Ed Gilbreath about the Tilghman racist remark about Tiger Woods and Al Sharpton's demand that Tilghman be fired. I appreciate and respect Ed's comments expressed below.

While I believe it’s right for Rev. Sharpton to remind us of the gravity of this situation and the weighty power of our words, I think he also needs to remember his call as a Christian minister and learn to balance his crusading activism with a spirit of grace and forgiveness. If instead of condemning this woman Rev. Sharpton were to say, “What she said was wrong, and we need to understand why, but we should forgive her and pray that we all learn from her mistake,” imagine the impact that could have on a jaded and cynical culture that lives by a code of tit for tat.

I admit it! I am a glutton for tools that help me keep me on track with my goals. I so easily fall off the wagon when I don't take time to plan my use of time and energy. So, here's another one, Don't Break the Chain! It was brought to my attention by a website story about Jerry Seinfeld. He was asked how he managed to be so productive and he said he started using an annual calendar to mark the days he performed his daily writing goals with a big X. He noticed a chain of X's developed, so his challenge was to not break the chain. Someone has developed a web site to take the place of having multiple physical calendars. I love it. I have six things I am tracking everyday. I have a few broken chains so far, but its fun to watch the chains grow and to start over when they are broken. 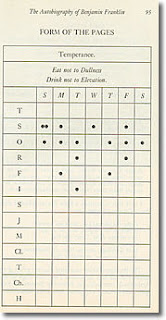 Ben Franklin had a similar tracking system by which he monitored his thirteen virtues. He developed it when he was in his twenties and was still using it when he wrote his autobiography at age 79. He committed to tracking his success in each of the thirteen areas and gave special focus to one each week. He developed a table for each virtue, reviewed them each evening and placed dots in the square for the days he faulted. After thirteen weeks he would start over moving through the virtues four times per year. He was motivated by Philippians 4:8 "Finally, brothers, whatever is true, whatever is noble, whatever is right, whatever is pure, whatever is lovely, whatever is admirable--if anything is excellent or praiseworthy--think about such things."
Posted by Arloa Sutter at 8:19 PM No comments: 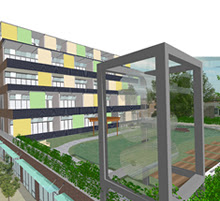 Here's a link to the plans for the vacant land around the el stop at Kedzie and Lake, down the street from Breakthrough.
Posted by Arloa Sutter at 8:02 PM 5 comments:

The Last Word on Suffering

Here's a message I preached at LaSalle Street Church three years ago, right after the Tsunami.

Posted by Arloa Sutter at 11:23 AM No comments:

Here's a free iTunes download from Regina Spektor! It's a beautiful New Years wish that was just released.

Here are the lyrics...

Posted by Arloa Sutter at 9:30 PM No comments:

This is how I spent the holidays! 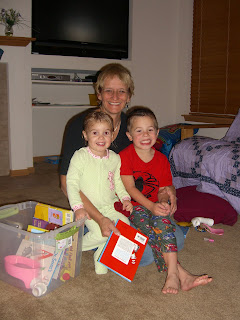 Posted by Arloa Sutter at 7:15 PM No comments: