Regarding the garbage? It's easier to blog about it!

"Why don't you just go out and pick it up?" someone asked. The problem of trash in our neighborhood becomes discouraging and as I said in my first post on this, there is a strong tendency to just give up.

There is often loose trash in the alley and we get used to seeing it there. There is a constant stream of people who go through the garbage to take anything useful. What is left gets strewn about. When one of my neighbors did neatly bag the items shown in my first post, the bags were ripped open and the trash strewn about again. We also have a problem with "fly dumping". When someone has a lot of garbage, rather than putting it behind their own homes, they put it in someone else's alley. That way they are not responsible for the fines. In this case the sanitation workers didn't take the garbage even after it was bagged, saying they needed help loading it into the truck. Eventually, after nearly a month, that garbage has been removed, but there is a similar pile of loose garbage a few houses down from us.

In order to "just go out and pick it up" we have to supply the bags, put the garbage in the bags, watch over the bags until the garbage truck comes, and then go out and help them load it into the truck. That's what eventually happened, but it's a lot of work, so we tend to look at it for weeks. It's a lot easier to blog about it.

OK,I'm going to go out and bag up some garbage now.
Posted by Arloa Sutter at 7:06 AM 2 comments:

Whenever I get discouraged...

I look at this. 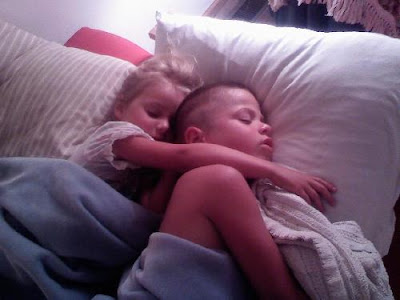 My grandkids have my heart!
Posted by Arloa Sutter at 7:12 PM 2 comments:

After I published my last post there was a google ad on my "successful post" page for a trash removal company. Coincidence?
Posted by Arloa Sutter at 6:37 AM 4 comments:

The garbage in my alley

My daughter has my camera or I would post another picture of the garbage in my alley. After weeks of seeing the image in my June 13th post, one of my neighbors finally went out and gathered the pile of garbage into a neat line of about six large black bags. Since then the garbage trucks have been by twice but they have not taken the garbage. One of my neighbors said the garbage collectors said they only pick up the garbage from the black dumpsters and they would need help from someone from the neighborhood to lift all of the extra bags into their truck. Somehow, I guess, we are supposed to know when they are coming and be out their waiting for them.

In the meantime, alley scrappers have ripped the bags apart to go through them and the garbage, once again, is strewn throughout the alley.

Here is the dilemma. If I call Streets and Sanitation, they will ticket my neighbor who I know does not have discretionary funds to pay fines. I also don't want to be targeted as the neighbor who complains. So the garbage remains. There is another pile of garbage just like it a few houses down.
Posted by Arloa Sutter at 6:26 AM 1 comment:

"I believe that many preachers finally get around to their sermon in their fatigue from everything else, and if imagination is the key to good preaching, you cannot be imaginative when you are exhausted."

Pray for peace in Iran

Listen to the desperation in this poem from one woman, alone in the dark on a rooftop in Tehran. I pray today for freedom from tyranny and oppression in Iran. That God's shalom will prevail.

Posted by Arloa Sutter at 2:07 PM No comments:

The worst question to ask a charity

Rosita Cortez, one of the people I follow on Twitter, linked me to this article by Dan Pollata on the Harvard Business Publishing blog. He writes about one of the most frequently asked questions that affects a nonprofit's rating with Charity Navigator, the Better Business Bureau, and the American Institute of Philanthropy. The question is "What percentage of my contribution goes to the cause rather than to overhead?"

His point is that because these watch dog groups make this the only question in determining an organization's effectiveness, they don't lead donors to consider the more important question, "Is the organization making a difference?"

How can that be, you ask? Well, the media, the watchdogs, and the sector itself have done an amazing job of training the public to think that the two things are the same, i.e., that if a charity has low overhead, it must be making a difference. Major studies on the relationship between organizational strength and impact find otherwise.

A strong organization needs a strong infrastructure. By continually forcing charities to scrimp on such things as operational management, fund raising, human resource development, marketing and information technology, misinformed funders are weakening the potential of nonprofits to diversify their funding base and ensure for the welfare of their staff.

Here's a link to another article from Bridgespan entitled, Nonprofit Overhead Costs: Breaking the Vicious Cycle of Misleading Reporting, Unrealistic Expectations, and Pressure to Conform, that makes a similar case. the authors write, "When nonprofit organizations are able to invest adequately in staffing and infrastructure-- “overhead”--they are better able to carry out their missions."

At Breakthrough we try to stretch every dollar. Funding for overhead is the most difficult to find and yet it I believe adequate funding for overhead is essential for us to carry out our mission effectively. Here's what I would suggest you do before you give to any organization.If you like what you see and you determine that you can trust the organization to use your donation wisely, give an undesignated gift so it can be used where it is most needed.
Posted by Arloa Sutter at 9:15 PM 2 comments:

Posted by Arloa Sutter at 11:04 PM No comments:

After awhile you tend to give up

This is a picture from my back door of the alley behind my apartment. It has looked like this for weeks. So why don't I clean it up? Probably for the same reason none of us on the block do. After awhile you get used to it, overwhelmed by it, and just give up. Maybe tomorrow. 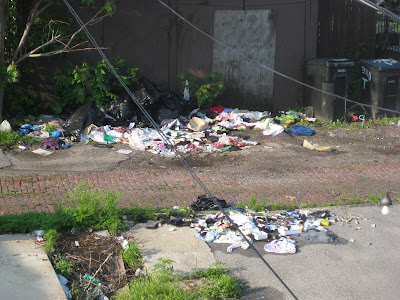 Posted by Arloa Sutter at 10:01 PM No comments:

Laughter is the Best Medicine

Posted by Arloa Sutter at 12:21 AM No comments:

Here are some very interesting facts about Warren Buffet, the second-richest man, who has donated $31 billion to charity.

He bought his first stock share at age 11 and he now regrets that he started too late!

He bought a small farm at age 14 with savings from delivering newspapers.

He still lives in the same small 3-bedroom house in mid-town Omaha, that he bought after he got married 50 years ago. He says that he has everything he needs in that house. His house does not have a wall or a fence surrounding it.

He drives his own car everywhere and does not have a driver or security people around him.

He never travels by private jet, although he owns the world's largest private jet company.

Buffett's company, Berkshire Hathaway, owns 63 companies. He writes only one letter each year to the CEO's of these companies, giving them goals for the year! He never holds meetings or calls them on a regular basis.

He has given his CEO's only two rules:

Rule number 1: Do not lose any of your shareholder's money.

He does not socialize with the high-society crowd. His pastime, after he gets home is to make himself some popcorn and watch television.

Bill Gates, the world's richest man met him for the first time only 5 years ago. Bill Gates did not think he had anything in common with Warren Buffet, so he had scheduled his meeting only for half hour, but when Gates met him, the meeting lasted for ten hours, and Bill Gates became a devotee of Warren Buffet.

Warren Buffet does not carry a cell phone, and he doesn't have a computer on his desk.

His advice to young people: Stay away from credit cards and invest in yourself and remember:

A. Money doesn't create man but it is the man who created money.

B. Live your life as simple as you are.

C. Don't do what others say, just listen to them, but do what you feel is good.

D. Don't go on brand names; just wear those things in which you feel comfortable.

E. Don't waste your money on unnecessary things; rather, spend on those people who are really in need.

F. After all it's your life, then why give chance to others to rule your life?

G. The best investment you can ever make, is to invest in the Kingdom of God.
Posted by Arloa Sutter at 8:48 AM 2 comments:

Cause Marketing vs. the Virtue of Giving

Here's a link to an interesting article in the Chronicle of Philanthropy asking the question, "Does Cause Marketing Replace Virtue with 'Mindless Buying'?" Writer, Brennen Jensen, refers to an article by Angela M. Eikenberry, assistant professor in the School of Public Administration at the University of Nebraska at Omaha, in the Stanford Social Innovation Review,in which she makes the case that

"the short-term benefits of cause marketing—also known as consumption philanthropy—belie its long-term costs. These hidden costs include individualizing solutions to collective problems; replacing virtuous action with mindless buying; and hiding how markets create many social problems in the first place. Consumption philanthropy is therefore unsuited to create real social change."

I think she makes a great point. Do we encourage more consumption in order to fund causes that have become causes because of consumption?
Posted by Arloa Sutter at 6:09 PM 2 comments: