At 6:00 PM on January 10th at the BMC (Breakthrough Ministry Cernter) at 402 N. St. Louis, Von Matthews is going to lead anyone who wants to show up in a time of prayer and praise at Breakthrough. We hope this will become a regular event that will unite our guests, staff and volunteers in a time of worship and prayer. Please come.
Posted by Arloa Sutter at 7:52 AM No comments:

Mark you calendar for Carl Ellis on January 17th 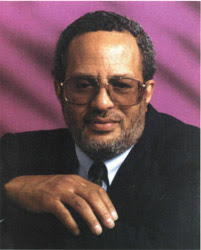 I mentioned before that we have invited Carl Ellis to join us at Breakthrough for a breakfast symposium on January 17th. I have quoted Ellis often in my own teaching about the centrality of social justice to the message of the gospel. He has a way of describing what I have called the "righteousness window" and the "gospel gap" that has transformed my theological understanding of racial and social justice. Click here to learn more about the symposium and to register, and click here to listen to one of Carl Ellis' messages. You won't want to miss this event!
Posted by Arloa Sutter at 7:35 AM 2 comments:

Chicago: A city divided by race

Check out this article in today's Chicago Tribune.
Posted by Arloa Sutter at 1:14 PM No comments: 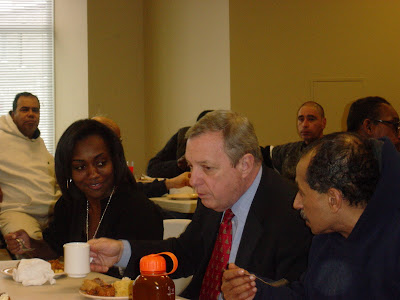 We were honored today when Kate Maher and her staff at the Greater Chicago Food Depository brought Senator Dick Durbin by for a visit to see the front line of food service and distribution. Senator Durbin has been influential in supporting a farm bill that will help to make more food resources available for communities like ours. The Senator ate lunch with us and stayed for more than an hour in spite of a ferocious blizzard. In this picture he is discussing the needs of the people served at Breakthrough with Breakthrough's Associate Director of Interim Housing, Cheron Massonburg.
Posted by Arloa Sutter at 8:12 PM 1 comment:

This is the kind of headline that makes me cringe. I literally feel pain over it. God help us not to let anyone near us experience this kind of neglect.
Posted by Arloa Sutter at 3:19 PM No comments:

Another reason why I love Chicago!

I went to dinner and a play with friends on Friday night. I hadn't shoveled my car out from the last snow storm, so at the end of the evening the two guys in the group shoveled out my parking space. All of us who live in the city without garages know that once you get your spot shoveled, it is understood that it is yours. Some put out chairs to make sure no one takes their spot, but in neighborhoods like mine, everyone knows where I always park and they have the courtesy to leave my parking spot for me. Of course, I would never take someone else's spot either.

Sunday, I spoke at River City Community Church and then drove out to Willow Creek to see their amazing Christmas show with some friends. When I got back to let Charlie (my dog) out before going to another friend's party, I discovered the snow plow had gone down our street and had thrown snow into my spot. Not wanting to violate the unspoken parking code I rammed my car into the spot and knew instantly I was severely stuck. I rocked back and forth a bit and finally called my friends to say I was going to have to miss their party. I had a nice night at home.

Since my apartment is just two blocks from Breakthrough's offices, I had no problem walking to work this morning, but had this nagging concern over how I was going to get my car unstuck.

So I did another commonly accepted routine. I got out my shovel, dug out a few shovels of ice (everything is frozen solid with sub-zero weather in Chicago), and began to rock my car back and forth. Sure enough, within about five minutes my neighbor, Darnell, was there to grab the shovel and a few moments later, Gary from down the street arrived. They shoveled, yelled directions about how my wheels needed to be positioned and whether to move forward or backward, and with combined effort, they lifted my car out of the rut I had dug and I was on my way.

I got out of the car to thank them and ask them if they needed anything. "Oh no", Gary replied, "That's what neighbors are for." So I gave them both hugs! I love my neighbors and I love how Chicagoans pull together in times like these. It seems everyone has a story like mine.
Posted by Arloa Sutter at 2:17 PM 2 comments:

I posted a new audio on the Breakthrough Stories Podcast in which I interview Tony Escobar, Breakthrough's Volunteer Coordinator, about the Breakthrough Christmas Store that will be held tomorrow at 402 N. St. Louis in Chicago. There is still time to contribute to the store and to join us tomorrow. You can click here to listen to the podcast and click here to learn more about the store.
Posted by Arloa Sutter at 2:08 PM No comments:

Yesterday, my good friend, Anita Lustrea, interviewed me on Midday Connection. She asked me about the affect of the cold weather on the homeless and about Irving Wasserman, whom I had written about in one of the devotionals in her new book, Daily Seeds, which she co-authored with her associates, Lori Neff and Melinda Schmidt. You can listen to the program at this link.

Irving Wasserman taught me how powerfully God can use people who seem to the world to be "weak and foolish" (1 Corinthians 1:27). Irving came to Breakthrough shortly after it opened in 1992. Peering curiously into the Center’s storefront window, he seemed pleased when I invited him into the center for a cup of coffee. Soon he came regularly for a hot lunch at noon.

Living on disability support, Irving had been diagnosed with schizophrenia as a young man. He had been institutionalized and given shock treatments, and he spoke of being sexually assaulted in the state hospital and out on the street after he was released. He was odd-looking, with the top of his pants lifted high above his waste and the bottoms high above his ankles. He was the object of frequent torment from neighborhood children.

Clearly, Irving was very alone, and Breakthrough became a sort of family for him. He enjoyed talking about current events and the world economy. Sometimes he would make perfect sense; other times he would release a string of profanity for no apparent reason, or become enraged over things that seemed insignificant. Conversations were unpredictable, but always interesting.

Irving’s overarching concern in life was the national debt. He had a great mind for numbers and watched the interest rates and markets closely. He was sure that with wise economic policies and habits, he could personally make a difference. He wanted to eradicate the national debt “for his own self respect”.

In fact, Irving was very particular about how he spent and saved his money. He washed his dirty laundry about once a year, bringing it to Breakthrough in a worn potato bag. He stuffed his pockets with used paper towels from the bathroom garbage to use for toilet paper. Irving’s apartment had plain plywood floors It hadn’t been painted or renovated in years. Irving wanted it that way because he didn’t want the landlord to raise the rent. He even asked us to help him move his stove out to the alley for the garbage men to pick up, because he didn’t want to pay the monthly gas bill to keep the pilot light lit. He picked up loose change he’d find on the sidewalk and immediately deposit it at the local bank, even if it were only five or six cents at a time. “I can’t trust myself with money,” he’d say.

I was surprised when one day, Irving asked me to help him to find a lawyer who would set up a living revocable trust for his estate. He said he knew he didn’t have long to live and that he had decided he wanted to give his savings to Breakthrough to be used for job training for the homeless and mentally ill. By living frugally and saving nearly $700 per month from his disability checks, Irving had bought government bonds every quarter for 50 years. With $500,000, this eccentric man, who had been forgotten by many, became Breakthrough’s biggest donor!

A year later, Irving was hospitalized with terminal cancer and hepatitis C, and he died shortly thereafter. He never wanted fame or a building named after him, yet Irving’s legacy will live on for many years to come through the changed lives of people who have been trained and have earned jobs because of his gift.
Posted by Arloa Sutter at 9:32 AM 3 comments:

Have a meaningful Christmas this year...